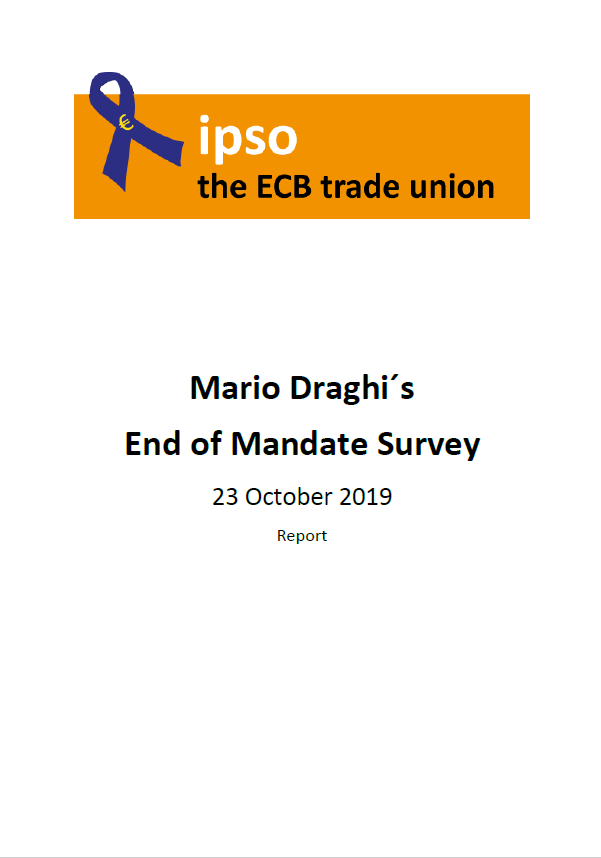 ECB Staff Trade Union IPSO has made a survey among ECB staff asking them to assess the Performance of Mario Draghi as a President of the ECB. We are sharing the main findings below. Journalists are invited to contact us if they need more details.

Mario Draghi is assessed to have been a very good or even outstanding President of the ECB by a majority of ECB staff who responded to the survey (54.5%), placing him substantially above the rating provided to Jean-Claude Trichet in 2011. A majority of respondents expressed a clear support for the monetary policy decisions taken by Mario Draghi over his whole mandate, and generally disagreed with the need to change its course at the current juncture.

The assessment regarding internal matters is more mixed, with Mario Draghi reported as being more distant towards the staff. Satisfaction was expressed regarding diversity policies and the issue of working time and stress, but the dissatisfaction regarding favouritism, unequal career opportunities and the dominance of specific nationalities in the organisation remain high. Mario Draghi´s flagship re-organisational measures (Project Crescendo and the introduction of the CSO) have not fully convinced the respondents, who also expressed dissatisfaction regarding improvements in HR attitude vis-à-vis the staff. Nevertheless, Mario Draghi is reported to have had a positive influence on ECB corporate culture.

The difference of assessment regarding the performance of the different roles – President versus manager – was also a feature of the 2011 survey, indicating that the institutional solution to address the contradicting demands between the two roles is yet to be found.